North Carolina’s long spring and long fall provide many days where conditioned air is unnecessary. Consequently, Lanou and Mehlman specified plenty of operable windows in every space within 502 Rigsbee. “A lot of commercial buildings don’t have operable windows, but our whole office includes the kind of people who would rather open a window if it’s nice outside than turn on the air conditioner,” Mehlman says. 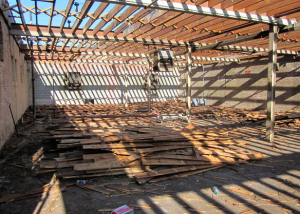 To create the most energy-efficient building possible, BuildSense opted to take the existing structure down to its skeleton,
leaving only the masonry shell and primary steel columns and girders. PHOTO: BuildSense Inc.

When conditioned air is required, the building uses six air-to-air heat pumps for six business spaces. “They’re very high efficiency and are actually residential systems. This caught me by surprise,” Lanou states. “The level of efficiency we specified apparently wasn’t commercially available at the time but it was available in the residential arena.”

Each of the six business spaces has a heat-recovery ventilator that is operated on a motion sensor. When tenants are in the space, the associated HRV pulls fresh air through the heat exchanger to create a healthy and comfortable indoor environment.

Similar to how the building occupants prefer operable windows to conditioned air, they also prefer natural light to electric. “We have a mix of LED and high-performance fluorescent lighting. There are occupancy sensors that know when we’re gone and turn off the lights,” Lanou states. “But we put the money into this high-performance lighting system and we barely use it.”

“We never turn the lights on,” Mehlman adds. “It was raining this morning and was a little dark but we didn’t turn the lights on.” BuildSense’s workspaces are adjacent to the second floor’s south-facing windows; window heights were planned so the sills are within a couple inches of the desks, ensuring each worker has excellent natural light and views.

The second-floor hallway, which is along the building’s north wall and property line, couldn’t be penetrated with exterior openings. The “green guys” still found a way to avoid electric lighting. “To keep it well-lit, we put in five tubular skylights,” Mehlman explains. “I would say those were my most pleasant surprise. I knew they would work but it’s astounding how well they light that space. We give a lot of building tours and people often think they’re electric lights.” 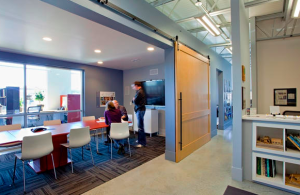 Lanou and Mehlman had no intention of resting on their low-energy-use laurels. They also wanted to generate energy to offset any being used. To that end, the roof features a 32.6-kilowatt solar array consisting of 136 panels and two residential wind turbines. Unfortunately, the wind turbines failed and the manufacturer is no longer in business, but the solar array alone has exceeded BuildSense’s energy-production goals.

“It goes up and down but, at the end of the day, we have a 12,000-square-foot building that is fully occupied and we’re spending an average of $300 to $350 a month on our electric bills—and electric is the only power bill in the entire building,” Mehlman notes.

By installing an energy monitoring system and tracking real-time energy use, Lanou and Mehlman were able to make adjustments related to energy use that they wouldn’t have known about otherwise. “When we looked at the building’s energy use, we saw a whole bunch of energy being used at night when the building wasn’t in use,” Lanou recalls. “So we went through and reprogrammed every thermostat. That single move significantly reduced energy use and didn’t change the comfort level because nobody was in the building for the times we were dialing the thermostats back.”

Christina A. Koch is editorial director and associate publisher of retrofit.

Library Is Renovated for the Technological Era