From Office to Residence

Built in 1929, 1616 Walnut St. has long stood as one of Philadelphia’s premier examples of Art Deco architecture. New ownership decided to convert the structure into a luxury residential building in 2013. 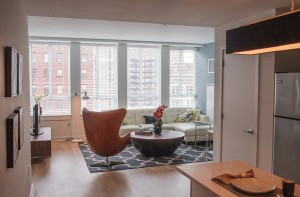 The design of 1616 Walnut St.’s windows called for neutral colors on the frames’ interior and a historically accurate reddish color on the outside. PHOTO: Ken Bruggeman

The rehabilitation included replicating existing steel windows, which were manufactured by a company that no longer exists. The Washington, D.C.-based U.S. National Park Service had to approve the new window design, which would be used to replace more than 1,300 windows.

Graham Architectural Products, York, Pa., which designed and manufactured the historically accurate windows, became involved early in the process. Bill Wilder, director of technical sales, explains early involvement is part of what keeps a historic project’s momentum. “The process to design a product that will meet the local historic entities’ and National Park Service’s requirements can be time consuming,” he explains. “The building owner was very savvy and got us working on the project very early on. We visited the site, sketched the existing window and then sketched ours to match it. After that, the historic consultant, Powers and Co. Inc. [Philadelphia], tweaked some designs they thought would help meet the National Park Service’s requirements.”

The time required to get NPS approval of the windows can be the biggest risk to the success of historic-tax-credit projects. Putting together an experienced historic window team early can greatly reduce the risk of delay in the approval process. This will help set an accurate budget that can be maintained, and the team also will help efficiently navigate the historic submission process.

There was a little back and forth through approvals, which is a two-step process. The first step is submitting background information to the park service. The second step, which Wilder was deeply involved in, is the technical submission, which includes submitting drawings, photographs and documentation to the National Park Service. “Matching the profiles got a little more refined than our off-the-shelf product, but we reacted quickly to feedback and redesigned the product where we had to,” he says. “We’ve done a lot of historic projects through the years; therefore, we have developed an extensive selection of historic product options and we can meet the historic requirements without it being too difficult or time-consuming.” Graham Architectural Products provided full-size mockups to ensure the windows and accessories matched the existing ones.

Two side-by-side casement windows adorned the majority of the building. “The owners didn’t want those to operate, but they wanted them to look operable,” Wilder says. “We see that request fairly often. If they are adding a new heating and cooling system, they don’t want operable windows. They also save costs on operable hardware.” 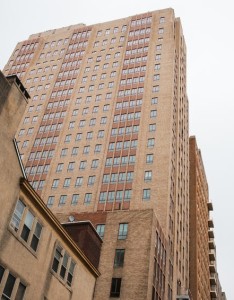 “The window ended up being deeper from the inside to outside than the original window, which is how we gained thermal performance and strength.” —Bill Wilder, director of technical sales, Graham Architectural Products. PHOTO: Ken Bruggeman

The original casement windows had hinges that projected about 4 inches from the face of the window, which Graham Architectural Products had to mimic. A hardware manufacturer created a casting to recreate the hinge.

The design called for neutral colors on the frames’ interior and a historically accurate reddish color on the outside. “That created some challenges,” Wilder notes. “Aluminum is painted prior to assembling the window. If you don’t design it correctly, it can be cumbersome from the cost standpoint, especially with high-performance finishes. The thicker insulated glass also made matching the sight lines and profile of the original window more difficult.”

Extruding the aluminum frames to the proper specifications that meet the historic profiles was not a difficult job. Wilder explains the challenge comes with marrying the thermal performance to it. “Aluminum can be extruded or cast into nearly any shape, but you have to design in thermal-performance enhancements to achieve energy-efficient windows,” he says. “And the window has to be structurally strong enough for a high-rise building. Aluminum isn’t as strong as steel, so you need to build strength into it. The window ended up being deeper from the inside to outside than the original window, which is how we gained thermal performance and strength. Aluminum is also a great conductor of heat and cold so we had to have thermal barriers to counter that and meet the ever-increasing energy codes.” High-performance thermal barriers and standard 1-inch insulated low-E glass yielded a window with a U-value of 0.42.

Double-hung windows on the building’s main façade had a distinctive raised profile around each pane of glass. Wilder’s team mimicked that look on 173 windows. “The NPS has become aware of that type of profile and views it as historically significant on historic projects; these windows are found all over the country,” Wilder explains. “The NPS is becoming more demanding on replicating that raised profile. We’re continuously trying to raise the bar to accurately reproduce these historically significant details as technologies and manufacturing techniques improve.”

Projects across the country, such as the Minnesota State Capitol and Philadelphia residential building, continue to push manufacturers and designers to create the most effective products while staying true to the original look.

Elyse Cooper has been writing about the design and construction industry for seven years, authoring articles for various nationally circulated trade publications.

179D and Other Expired Tax Deductions Are Extended